Have you ever had that trip? You know, the one where everything that could go wrong did? That was our recent trip to Frankfurt am Main. It actually started several months earlier, when we were applying for new passports. These are, by the way, our third set of officially issued passports – simultaneously held, and no, …

END_OF_DOCUMENT_TOKEN_TO_BE_REPLACED

Believe it or not, Oktoberfest kicks off in Munich this weekend. Yes, it actually kicks off in mid- September. What began as a celebration of the marriage of King Ludwig I to Princess Therese in October 1810, has grown to a beloved cultural festival. From mid-September to the first weekend of October, a festival is held at …

END_OF_DOCUMENT_TOKEN_TO_BE_REPLACED

When you visit Munich, you expect to see beer and pretzels, Dirndls and Lederhosen, fest tents and beer gardens. Of course, Munich has all of that. But leave the heavily congested tourist areas and you’ll find the unexpected as well. It is in these areas less traveled by tourists that you’ll find some of my favorite spots in Munich. Take the tram out of the city center to the Hirschgarten recreation area and eat at the Königlicher Hirschgarten – the world’s largest beer garden. Or visit the winding peaceful trails centrally located in Tierpark Hellabrunn. Or why not visit my favorite place in Munich? The wide expanse of green space known as the English Garden.

It is in the English Garden that you will find the most unexpected thing of all.

We were on the way to the Chinescher Turm Biergarten when we were distracted by movement near the Himmelreich Bridge. What we came across there was probably the last thing I imagined I’d find in Bavaria. But there it was. Oddly juxtaposed against the background of a beautiful fall in Bavarian, with trees in vivid oranges, reds, and yellows bathed in the golden light of early evening, was a man in a wetsuit. He was carrying a surfboard.  There in the middle of Munich, we had stumbled across surfers. Dozens of them. Yes, Munich has a thriving surfer population, you’ll find them lining the banks of the Eisbach canal in wetsuits, waiting for their chance to master the manmade waves. 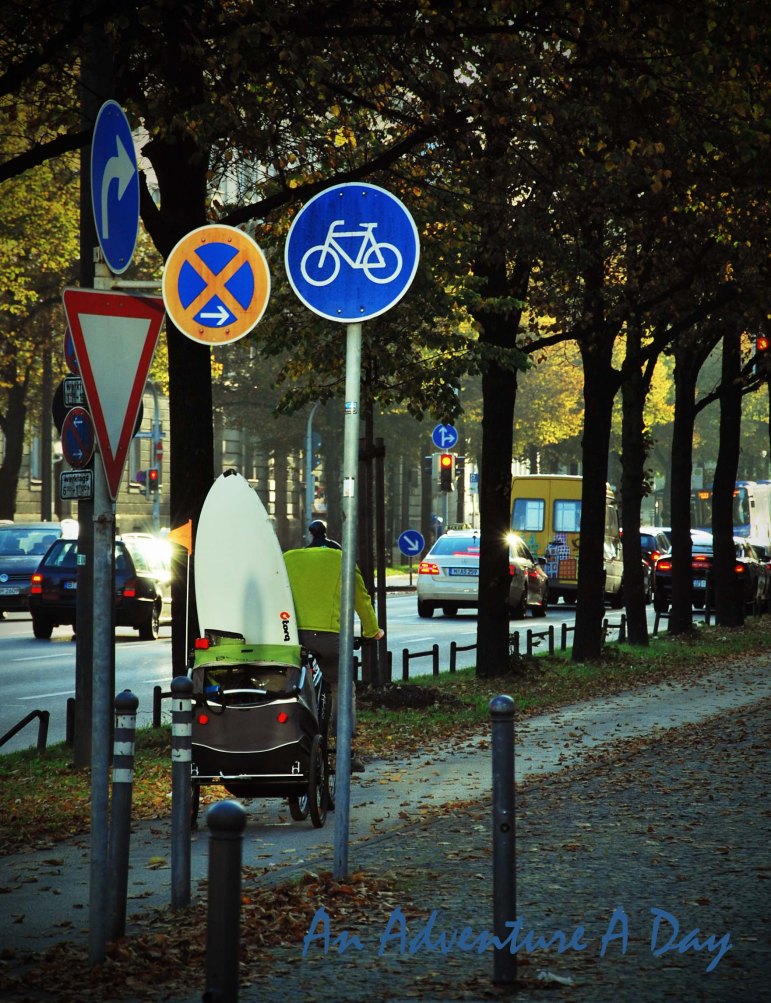 While you expect to cross paths with bikes in Munich, you may not expect to see them with a surfboard in tow. 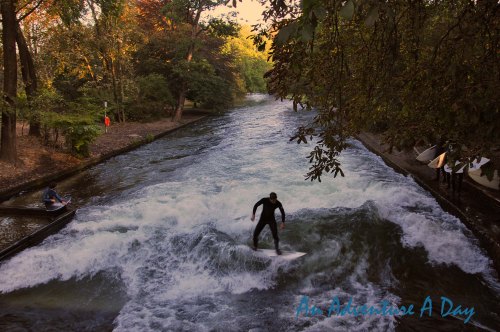 Not what you expect to encounter in the fall. In Bavaria. 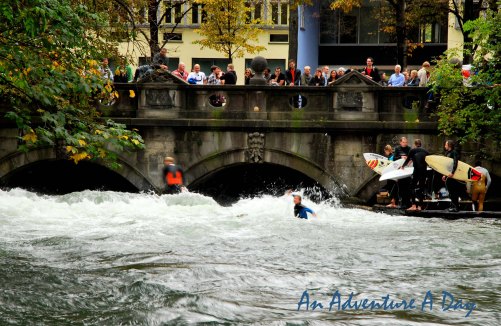 A crowd gathers on the Himmelreich Bridge to watch the surfers. 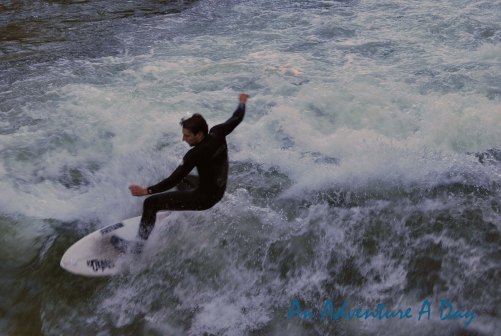 It takes quite a bit of skill to maneuver the short distance across the canal – and back. 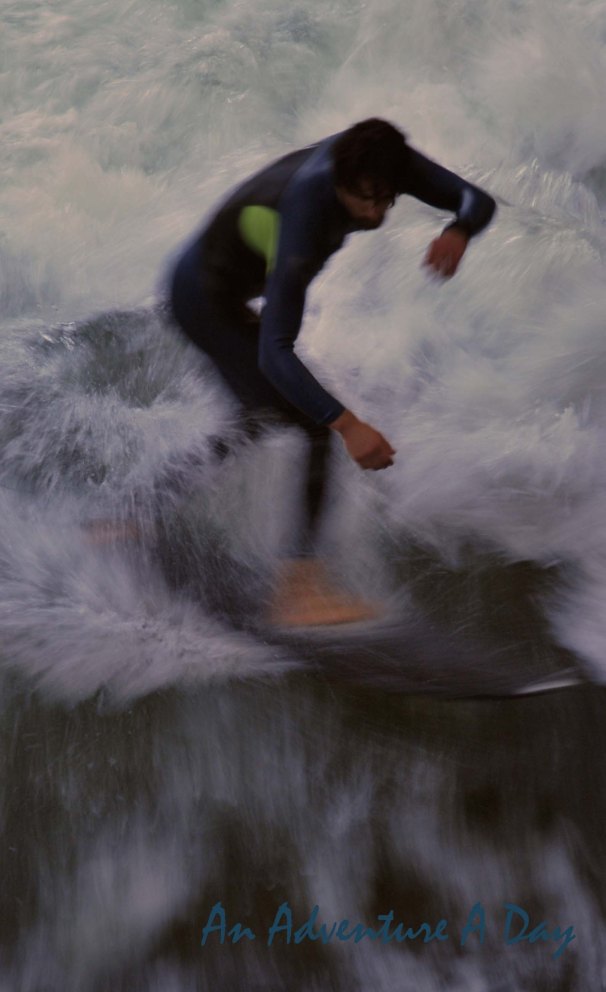 Showing off some moves in the English Garden. 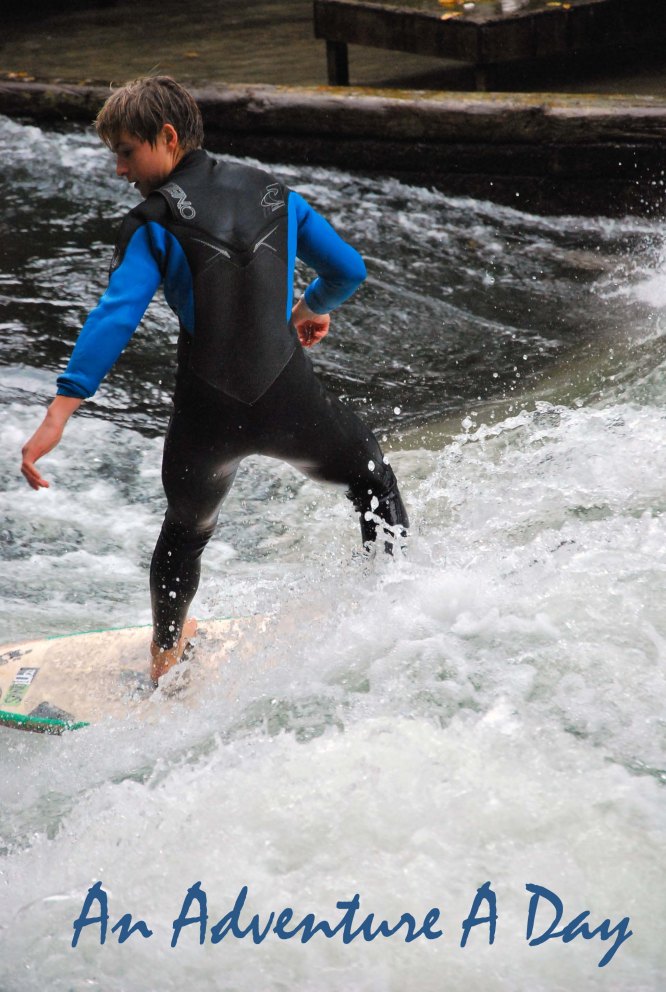 A surfer expertly moves from one bank to the other, above a manmade wave in the Eisbach Canal

We stopped to watch the expert movement of these unique athletes. The manmade river is not particularly wide, and with crowds of observers and surfers crushing in on all sides it appears even smaller. The movements of the surfers are sure and quick as they deftly maneuver back and forth, from side to side, until they lose their balance and the next individual quickly moves from the bank into the water.

Although surfers have put their skills to the test here since the early 70’s, it has only been legal since 2010. Because of the quick turns and rapid current, only experienced surfers should attempt to cross the banks.

If you are looking for something a little unusual to do in Munich, head over and watch the surfers in the English Garden.

This week, the travel theme at Where’s my Backpack? is Move.  Stop by and see what moves other travelers!


It’s been a couple of months since my last Friday photo. Our move is complete, and we’ve got internet in the house. This week, the WordPress photo challenge is Monochromatic. I’m heading back to Munich this week, to Tierpark Hellabrunn. While there, we spent some time observing the polar bear. I couldn’t help but notice how monochromatic the enclosure was. 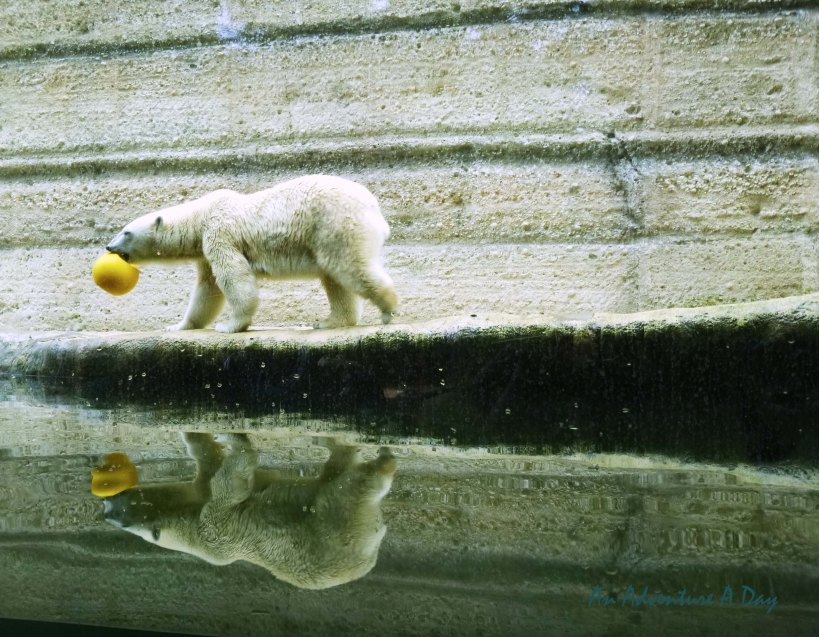 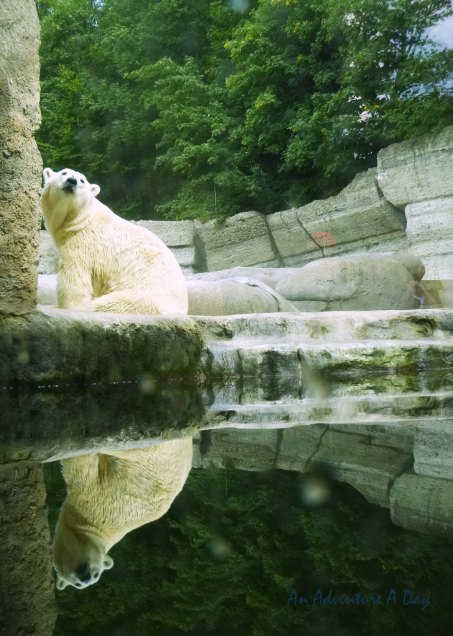 You can find more definitions of monochromatic at the WordPress Photo Challenge: Monochromatic.

It was five long summers ago when we left the comfortable familiarity of the US for unknown adventures of life in Europe. We didn’t know what to expect, how could we? We stepped out of the airport in Stuttgart, and suddenly everything was different. Three summers later we exchanged our address in Baden Württemberg for …

END_OF_DOCUMENT_TOKEN_TO_BE_REPLACED

Once again, it’s that time of year. It’s the night before the first day of school. Like the tide at the beach, slowly the school year rolls in for children around the globe. Tomorrow, it’s our turn. For us, it’s not just a new year, not just a new class, or a new grade. For …