In the past year, I’ve made it a point of going out on my own and exploring Rome. Sometimes I only managed one or two outings a month, and other times I’ve managed an outing each week. I’ve revisited new shows in museums and churches I’d visited in the past, and discovered many more along the way. I’ve tried several new places to eat and logged so many miles I needed to upgrade my everyday hiking shoes.

In a city with as much to discover as Rome, it is difficult to know where to begin. If you’d like a few pointers from someone who’s done a fair bit of walking around the city, join me and I’ll show you the Rome I’ve discovered along the way.

I’ve initiated nearly every journey I’ve taken in Piazza del Popolo. It is of course possible to take public transportation to arrive closer to my destination, but I love commencing my journeys here. 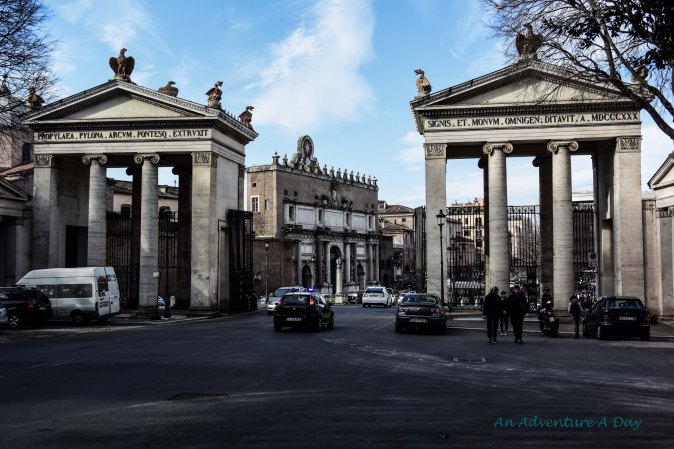 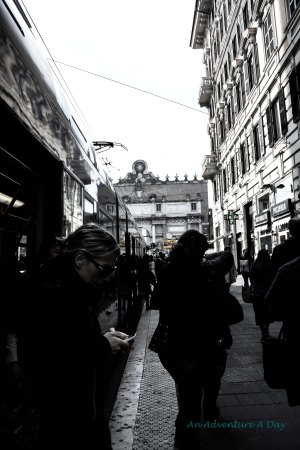 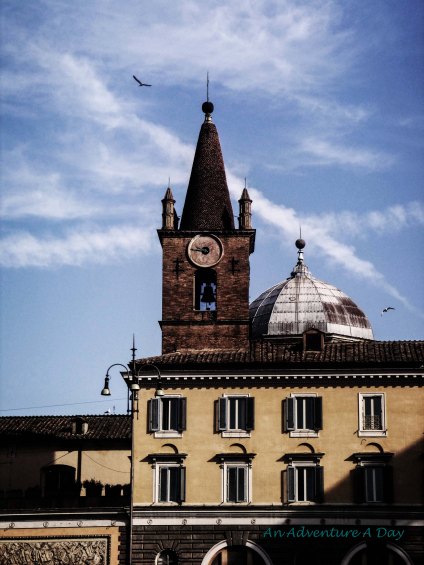 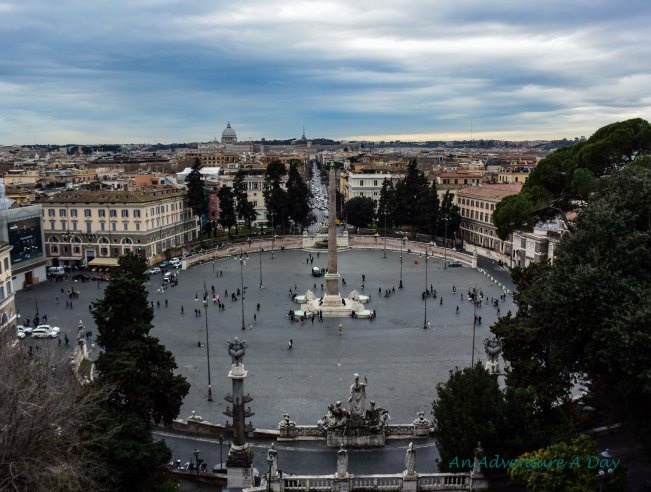 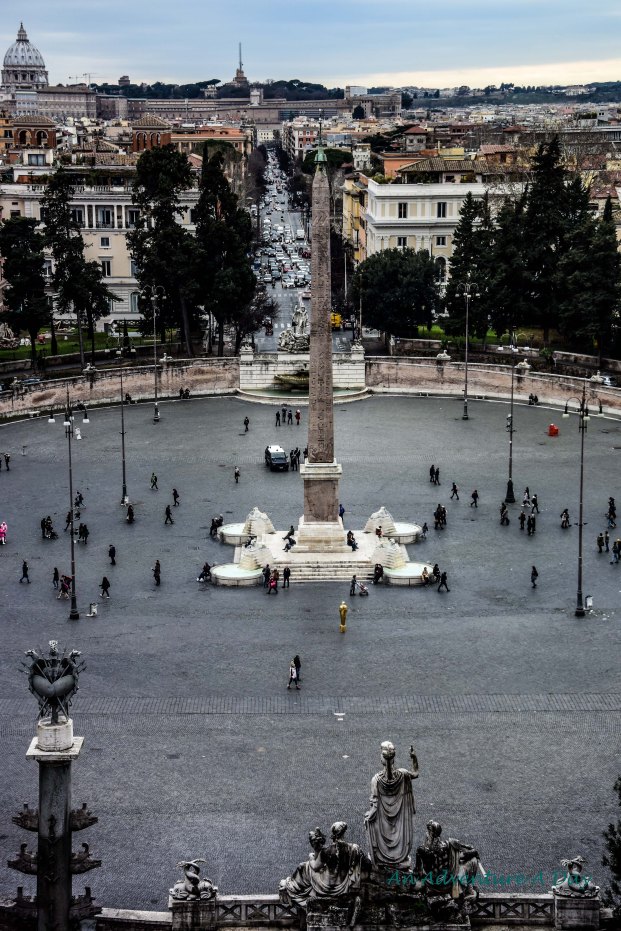 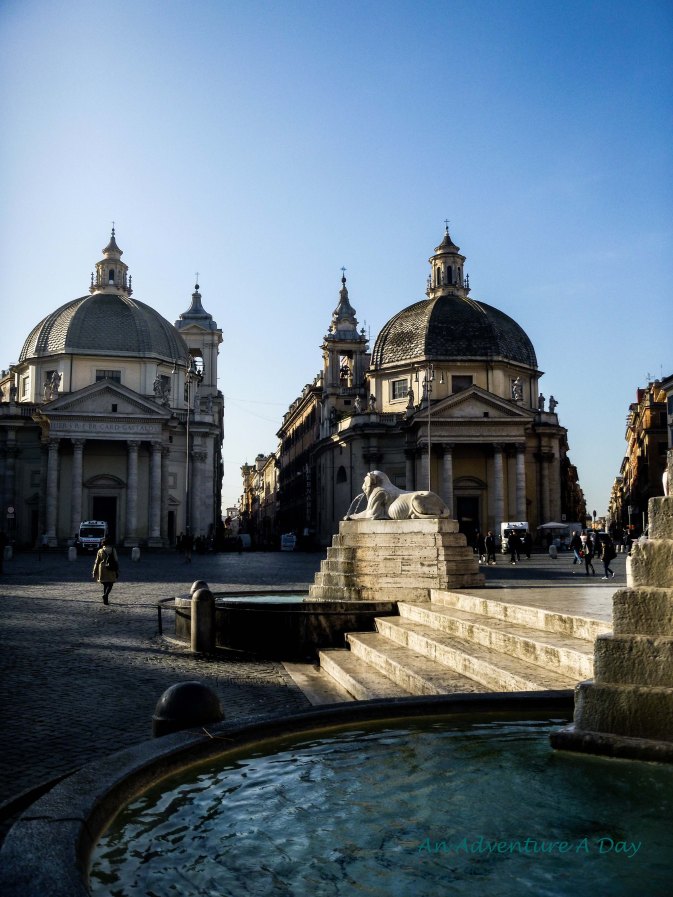 Arriving at the gates of Piazza del Popolo provides a physical manifestation of a psychological boundary. Once I’ve crossed into this piazza, my daily responsibilities simply melt away and I am an anonymous observer, an explorer, a pilgrim, a discoverer.

Even if I am in a rush to pass through, I always take in the sweeping view of the piazza before I continue along my way. What is it about this Piazza that makes it such a special launch pad for adventure?

For me, it is the feeling I get as I disembark from the tram I have taken in to the Storico Centro – the historical center. It is the glimpse of the Porta del Popolo towering above me as tourists and locals rush out of the doors, hurrying to catch the light, or the metro and continue their journeys.

The gates towering above hold the promise of adventure just beyond, and I am ready. No matter the number of times I view this site, I am in awe of these intimidating walls which seem to beckon me forward. They invite me to pass through and discover the secrets that lie on the other side.

Perhaps this is just Piazza del Popolo doing the work it was intended to do – giving the pilgrim arriving in Rome a dramatic welcome to this ancient city. An entrance that will never grow old, that will both welcome and overwhelm the weary traveler standing at the door.

In fact, Bernini added the following above the Porto (the door) to welcome Swedish Queen Christina, a Catholic convert, to Rome in 1655 – FELICI FAUSTOQUE INGRESSUI MDCLV – For a Happy and Propitious Entrance.  Could there be a more auspicious place to begin your journey?

As one of the gates of the Aurelian Walls, the location has been a main entry point for the city in many iterations over the centuries. This space wasn’t always the most welcoming site. In times past, the fountain served as a place for those who lived nearby to do their laundry. Livestock grazed among the people entering the city for the first time.

Take Irving Stone’s description of Michelangelo’s less than favorable impression of Rome’s front door when he views it for the first time in The Agony and The Ecstacy:

(They) descended to the Porta del Popolo, passing the tomb of Nero’s mother to enter the small piazza. It stank from piled garbage. Above them to the left was the Pincio hill covered with vineyards. The streets they followed were narrow lanes with broken cobbles underfoot. The noise of the carts passing over the stones was so deafening…

As he further observes the state of ruin and decay, with goats grazing everywhere and dead animals under the feet of their horses, “Michelangelo felt sick to his stomach: the Mother City of Christendom was a waste heap and a dunghill.”

Through many changes over the years, the northern entrance to the historic center of the city has come along way since then. The current Porto del Popolo was built over the remains of an ancient Roman gate. I once read that the remains of Nero were once housed in this piazza as well, the people feared his spirit cursed and haunted the square. Both were banished when a pope had the mausoleum destroyed, the ashes dispersed, and built the Church of Santa Maria del Popolo on those same grounds.

The design of the Piazza, like much of Rome, progressed through the ages, but the location ensures that the square remained an important starting point. In fact, maps of the city of Rome used to have Piazza del Popolo at the bottom, in order to aid pilgrims along their journey.

Once you pass through the gates, the first thing you’ll notice is the large obelisk in the center of a fountain with four lions. The obelisk once adorned an Egyptian temple of Ramses. It was then taken to the Circus Maximus by the Emperor Augustus where it remained until 1589 when Pope Sixtus V brought it to serve as a center piece of the piazza before you. The lions were added in 1823.

Piazza del Popolo will also provide you with your first taste of the sometimes aggressive street hawkers, selling everything from selfie sticks to noisy blobs of colored goo. Ignore them if you can and take in the ambience of the square before you. The square is quite large – 184m by 124m, but take note that there are streets running on either side of the piazza, so please look before you step in front of traffic.

To your left and right on the square – to the east and the west, are two additional fountains. At the base of the hill to your left is a fountain to the Goddess Roma.  The fountain to your right depicts Neptune. Stairs above the fountain of Roma lead to a fantastic overlook of Piazza del Popolo. From here you can glimpse the symmetry and grace of the space below you.

Although many people claim that Piazza del Popolo takes its name from the Poplar trees that once grew here, I personally think it is more likely that the Piazza owes its current name to the Church of Santa Maria del Popolo – Sant Mary of the people.

Back down in the square, you’ll notice two churches nestled between three roads to the south, opposite the gate you entered. The Church on the east is Santa Maria in Montesanto, the Church to the west is Santa Maria dei Miracoli. Santa Maria in Montesanto is also known as the Artist’s Church. Beginning in the 1950s artists read at the masses of the church and a prayer for artists was read at the end of mass. I believe that this tradition continues, but I haven’t been able to locate anything that says so definitively.

As you prepare to leave the Piazza, you’ll notice three distinct paths lay before you. Known as the Tridente (Trident) this was designed to allow pilgrims to easily find their destination. Furthest to the west is Via Ripetta leading to Ponte Sant Angelo and St. Peter’s. In the Center is Via del Corso leading to San Giovanni in Laterano. To the East is Via Babuino leading to Piazza di Spagna and Santa Maria Maggiore.

Now that you’ve acquainted yourself with Rome’s grand entryway, it’s time to explore the rest of the city. You will find that the Tridente is an excellent way to keep your bearings as you discover the treasures tucked away awaiting discovery just beyond these three main streets.